On Saturday 05 August, three of our cadets went to experience one of the newest form of paddle sports, proving that there is more to being an Air Cadet that taking to the skies.

The cadets were given the opportunity to travel to Priory Park in Bedford to have a taster of Stand-up Paddle Boarding.

They were accompanied by staff members, Civilian Instructors Chris Cutler and George Hodgkin, who have a keen interest in paddle sport.

As this was a taster season the training was very informal focussing on basic paddling strokes and having fun exploring the limits of the boards capabilities. 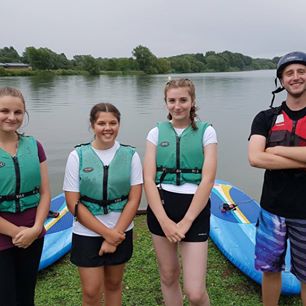 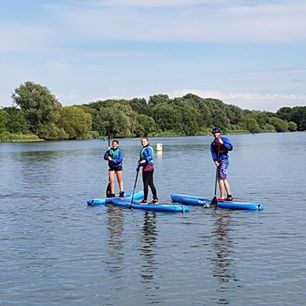 Whilst out on the water, they were given time to find their balance whilst standing on the boards and practice some basic motoring skills. They also played a couple of games which utilised the cadet’s leadership training and problem solving. One of the games was Jenga, where they had to stack all the paddle boards into a platform, whilst in the middle of the lake. A task a lot easier said than done, but with a lot of communication it was accomplished without any problems. In total, they spent 2.5 hours on the water.

Cdt Brooke Harwin ‘thoroughly enjoyed the session. I’ve not had the chance to Stand-up addle Board before so I was really excited when the opportunity came up with the squadron. The best bit of the day was jumping off the boards whilst in the middle of the lake and practicing getting back onto them without returning to shore.’