Three of our cadets were flying high recently after being selected to have their first experience of what Air Cadets is all about – their first flight in a Grob Tutor.

They travelled to RAF Cranwell to 7 AEF Squadron and were put through their paces with the pre-flight brief before getting final confirmation that they will be venturing into the skies. 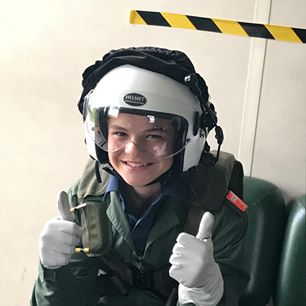 Cadets Neale-Moss, Clarke and Guest have not had the chance to go flying with the Cadets as of yet so they were extremely excited to be given the opportunity. It was touch a go as to whether they would be able to fly due to the inclement weather forecasted but none the less, the cadets travelled to RAF Cranwell to see if they would be able to get airborne. It was not a wasted journey as the rain held off!

The cadets had on average, 20 minutes in the air and during this time, they were shown how to control the aircraft, had a familiarisation session on all of the equipment in the cockpit and then they were able to take control of the aircraft.

‘It was amazing when the instructor told us to take control of the aircraft, we were flying it ourselves!’ Cadet Guest commented afterwards.

Cadet Lee Neale-Moss, who had never been in an aeroplane previously was nervous about the thought of going flying, however, he was first in the air during the afternoon sortie and removed any fear of flying by going. Mrs Neale- Moss commented after the event ‘Thank you so much for giving Cdt Neale-Moss the experience of his life, he has come home absolutely buzzing and can’t wait to do it again. 8 months ago, I was trying to convince him to join (the Air Cadets), his main fear was flying but today you helped him conquer his fear!’